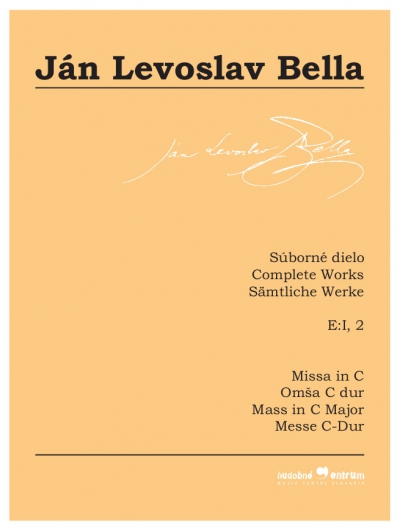 Ján Levoslav Bella composed both secular and sacred music. Of his numerous Mass compositions for various line-ups, many have been lost. Hence today we know only a few such works of his, including the vocalorchestral Mass in C Major (in Latin Missa in C) for solos, choir, orchestra and harmonium/organ. This composition, which originally belonged to a series of nine Sunday Masses, bears the name Sonntagsmesse in C dur No. 6 in its source material. The extant source material, in the form of vocal and orchestral parts, given the fact that it is archived in various collections and under a variety of signatures, necessarily had to be completed first and afterwards combined into a score. In the collected edition, in harmony with the Latin setting the Mass received the Latin name Missa in C and is assigned to the edition as volume E:I, 2. The present volume presents it in published form for the first time. Despite the fact that the Mass was originally designed for liturgical purposes, its artistic and aesthetic value is unimpeachable.