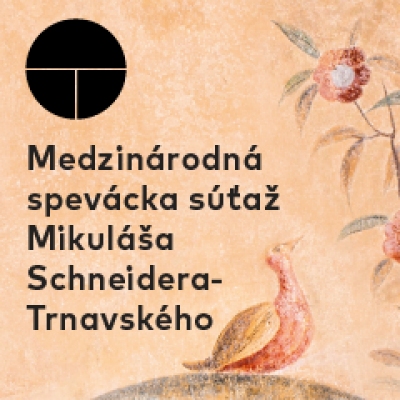 Organized by the City of Trnava and the Music Centre Slovakia

Conditions of the competition

1. The mission of the competition is searching for young talented performers of concert vocal art, stimulating their further artistic growth, promoting of concert vocal production – with attention to works by Mikuláš Schneider-Trnavský and selecting of participants for the next international singing competitions.

The 1st category has three rounds; the competition repertoire is less demanding. Singers born after years: women – 1995 / men – 1993 can enrol in this category.

The 2nd category has three rounds with more demanding repertoire. Singers born after years: women – 1986 / men – 1984 can enrol in this category.

2. Laureates (1st place) of the international singing competitions within the years 2014 – 2019 are not obliged to take part in the 1st round of the competition but are promoted directly to the 2nd round – the same registration fee still applies. It this instance a copy of the prize winnig diploma should be sent together with the application of admission.

Deadline for sending the application forms is posponed to 25 April 2019.

Statute of the competition

Payment documents have to be sent electronically to the e-mail slavka.ferencova@hc.sk or by mail to the address of the competition:

The registration fee should be sent to this account number:

5. Songs in each round of both categories of the competition are at the choice of the competitor within the areas specifed.
6. Transposition of arias is not allowed. Songs may be performed only in the transpositions issued for a competent voice range. The songs of Mikuláš Schneider-Trnavský may be transposed only for deep voice ranges, according to the published original.
7. The competitors are not allowed in any round to repeat a song they have already performed at the competition.
8. The competition repertoire has to be performed in the original language.
9. All songs have to be performed by memory (except arias from oratorios, cantatas or masses).
10. Men and women will be judged separately for each category. The Jury has the right to consolidate the prizes and divide them to equal shares or to not award some of the prizes if the standard is not reached (the first prize is indivisible).
11. The decisions of the Jury is final.
12. The competition is open to public audience.
13. If a competitor does not have an accompanist, he/she can ask the organizer for piano accompaniment.
14. The organizer of the competition can book hotel accommodation for the competitors and accompanist on request.
15. The competition results will be announced at the award ceremony which takes place during the final Laureates' concert on the 25th May 2019.
16. The competitors agree with the eventual public audio or video recording without any claim to commission.
17. Further information or music scores will be sent directly to competitors on request.

* City of Trnava Award for the best piano collaboration

* Theatres awards – awards for the finalists of the competition (an offer of a guest appearance or an audition in the given theatre) on the basis of the selection of the theatres’ representatives or the jury recommendation:

Opera of the Košice State Theatre