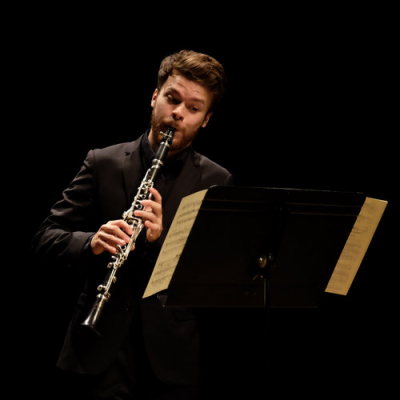 Slovak clarinetist. In 2016 he became a soloist of the prestigious Parisian Ensemble intercontemporain. Graduate from Bratislava Conservatory and the Janáček Academy of Music and Performing arts in Brno, Czech Republic, he is also acquiring experience in orchestras such as Gustav Mahler Jugendorchester and European Union Youth Orchestra under the baton of Philippe Jordan, Christoph Eschenbach or Vladimir Ashkenazy to name a few. Despite his short career, he has achieved remarkable success at home as well as abroad. He received first prize at the Leoš Janáček International Competition (Czech Republic, 2014), Clarinetto Concorso Carlino (Italy, 2013), and Concorso Anemos (Italy, 2013), as well as other awards. At various masterclasses, he has had the opportunity to study with Charles Neidich, Harri Mäki, Yehuda Gilad, Philippe Berrod and others. As a soloist, he regularly presents himself on the international scene in Europe, North America and Asia. In Slovakia, Martin Adámek collaborates with Cluster Ensemble, Veni Ensemble and Veni Academy, three ensembles specializing in contemporary music. Together with pianist Zuzana Biščáková and soprano Nao Higano, he founded the trio Sen Tegmento, and has been commissioning new pieces ever since their first concert in 2016.