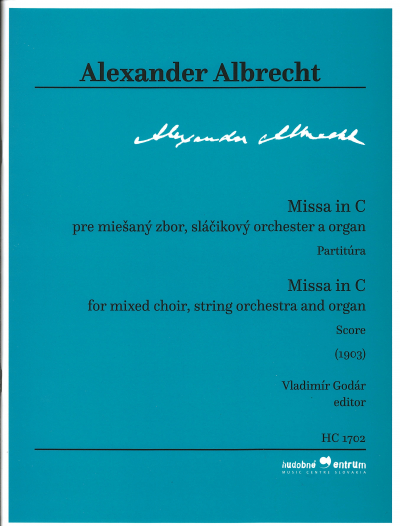 Th item MUS LVI 68, comprising several independent pieces from the musical heritage of Alexander Albrecht, which is deposited in the Slovak National Museum-Music Museum, includes also one juvenile vocal-symphonic piece of the author’s. Missa in C by Alexander Albrecht, a pupil of the Royal Hungarian Catholic Grammar School by the Poor Clares, was composed for mixed choir, strings and organ. It was a habit followed by the school that the musically most giftd student played the organ during the common services: Alexander Albrecht’s predecessor in this position was Béla Bartók,
and Ernő Dohnányi before him. Albrecht’s work was performed in 1903 by the students led by Prof. Wilhelm Krauss and with a great success. Many years later the 72-year-old author recollected this social and artistic triumph of his life with a smile: “During the holidays between the third and fourth grammar-school year I wrote four movements of the Mass for Choir, Strings and Organ. At that time I was already an organist of the grammar-school church. The two missing movements were written no sooner than two years later and the whole work was performed with a great success among my schoolmates. Thse carried me triumphally on their shoulders to the classroom, however, on the threshold they stumbled and fell down and so did I, the celebrated one. Ths I experienced advancement and fall following closely one aftr another.” The choral and orchestral parts were written for the composer’s classmates, the organ part for himself personally. All movements of the Mass reflct the demand for understandability of the lyrics and proper expression; those were the requests of the Cecilian movement. Missa in C is a juvenile work of a fourteen/seventeen-year-old
grammar school student. The composer accomplished his goals through attainable means – the school organ, school choir, two solo voices (soprano, alto) and an amateur string ensemble. The liturgical text is set to music in canon. The work is also an expression of the youthful Catholicism, which experienced many metamorphoses in
his adulthood.